6.1 Reunification and Rise and Fall of the Sui Dynasty 隋朝的兴衰

Empty
From the end of the 6 century to the early 10th century, a unified empire was rebuilt in China and entered into its heyday. 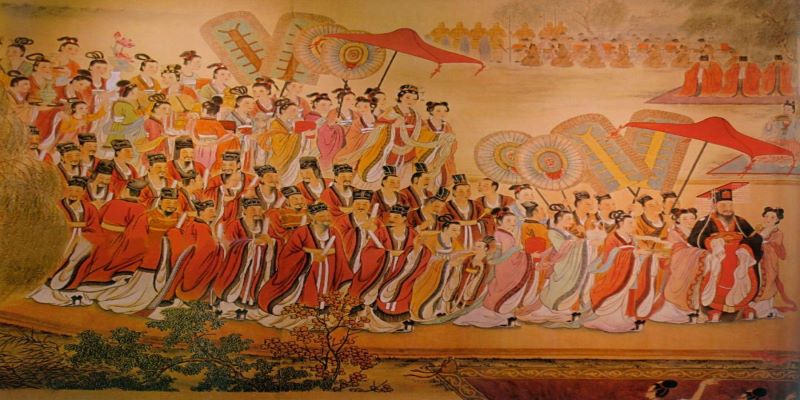 From the end of the 6 century to the early 10th century, a unified empire was rebuilt in China and entered into its heyday.
In 581, Yang Jian, a female-side relative of the emperor of the Northern Zhou, replaced the dynasty and renamed the nation as Sui with the capital in Chang' an (today's Xi' an, Shaanxi). Yang Jian, Emperor Wendi of the Sui Dynasty from a military noble group of Han, was the son-in-law of a noble of Xianbei and the maternal grandfather of Emperor Jingdi of the Northern Zhou Dynasty, who succeeded to the throne at age 7. His family itself was the epitome of the time featuring merging of ethnic groups. Yang Jian was encircled by a group of Han officials and Xianbei nobles deeply influenced by Han culture. Furthermore, his position as a royal relative who was entrusted to assist handling politics rendered him great power and privileges. That facilitated Sui's smooth replacement of Zhou and the subsequent establishment of the Sui Dynasty, the first dynasty ruled by Han people accepted by the minorities in the Northern Dynasties, indicating the shift from an ethnic war to a reunification war.
In 589, the Sui troops crossed the Yangtze River and ended the Chen Dynasty, capturing Jiankang within eight days and reuniting China after 400 years of separation. Sui achieved unification based on a broader and deeper base, such as the integration of the Yellow River and Yangtze River economic areas, greatly intensified the political, economic and cultural ties between the north and south, and promoted the rapid growth of social economy.
After reunification, Emperor Wendi and his successor Emperor Yangdi promulgated a series of political and economic reforms to further intensify the centralized sovereignty and develop social economy. At the beginning of Emperor Yangdi’s reign, he started to build Luoyang to better display its function as an economic center. Meanwhile, a 2000-km-long canal from Zhuojun (today's Tongzhou District, Beijing) in the north to Yuhang (today's Hangzhou, Zhejiang) in the south was also being built. The Grand Canal, linking five rivers—the Haihe River, the Yellow River, the Huaihe River, the Yangtze River and the Qiantang River—became an important artery closely linking politics, economy and culture, and played an important role in consolidating and promoting development along the river banks.
The period from the start of the Sui Dynasty to the early regime of the Emperor Yangdi saw vast expanses of territory and powerful national strength. With substantial increases of the population and land reclaiming areas, the state's official granaries could contain grains totaling millions to thousands of millions of shi (one shi equals 50 kg). Extra granaries were built for relief in times of harvest failure. At the end of the regime of Emperor Wendi, "the grain storage nationwide could meet needs of the people for the next 50 to 60 years." In the term of Emperor Yangdi, the cloth and silk in Dongdu piled up like mountains. Part of the storage of the Sui Dynasty still remained until the 20th year of the reign of the Tang Dynasty. This was why Ma Duanlin, a historian of the Yuan Dynasty, said "no other dynasties in history could be compared with the Sui."
Emperor Yangdi determinedly and dauntlessly pursued his policy of reform, with great achievements. Most of the projects and political and economic reforms initiated by him were of strategic significance, contributing to the flourishing of the later Tang Dynasty. However, he paid little attention to the people's burden and continuously engaged in civil works with millions of people and wars against Koryo, resulting in desolated lands and starving people everywhere. Civilians even broke their own hands and feet to escape from labor and army service. Emperor Yangdi's tyranny gave rise to nationwide peasant uprisings. Sui rapidly perished. In 618, Li Yuan seized the opportunity and established the Tang Dynasty in Chang' an.